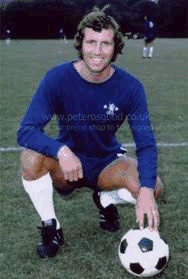 (Are we allowed to mention football? First Bobby Moore and now Osgood – H)

As a life long supporter it was with great sadness to hear that the goal scoring legend had died. One of my greatest Chelsea memories was Osgood’s diving header in the 1970 FA Cup replay at Old Trafford to level the score at 1 - 1 against Leeds. A David Webb header later in extra time eventually won the cup and sent us deliriously high back to .

Peter Osgood was born 24 February 1947 in . He was working as a bricklayer when he signed amateur forms with in 1964. Manager Tommy Docherty soon elevated him to the first team, making his full team debut on 16 December 1964 in a League Cup game, scoring both goals in a 2 - 0 win against Workington Town.

Following an end of season tour of Australia, during which Osgood scored twelve times in eight games, his next senior match was the September 22 1965 4 - 1 victory over AS Roma in the Inter-City Fairs Cup. From this moment he became a regular in the first team.

A broken leg suffered in a challenge by 's Emlyn Hughes in the league Cup on the 6th October 1966 seriously curtailed his progress. He returned from the injury to a new manager Dave Sexton, who would often draft him into playing in the midfield, but it is as a goal scoring centre forward that he is best remembered. He was up there with George Best at his peak.

In total Osgood made 380 appearances for , scoring 150 goals. He won a total of four international caps for and was a member of the 1970 World Cup squad in , making two appearances. He still remains the last player to score in every round of the FA Cup.

In 1971 Osgood was part of the team that lifted the European Cup Winner’s Cup defeating Real Madrid 2 - 1 in , where he scored 's second decisive goal.

Following a disagreement with Dave Sexton, Osgood, along with several other team mates, was placed on the transfer list, being sold to Southampton in March 1974, for a then club record £275,000. During his time on the south coast he won the FA Cup again in 1976, a 1 - 0 victory over Manchester Utd. He left in November 1977, were he had scored 36 goals in 157 games for the Saints. He also had a brief loan spell with .

Osgood returned to in December 1978 following a stint in the with the Philadelphia Furies. On his return to the Bridge, the club were in decline and facing a relegation battle. He again scored on his debut to put the team ahead, though still lost 7 - 2 to Middlesborough. He stayed with the club before retiring in December 1979.

After leaving football he ran a pub in for a while, with his old strike partner Ian Hutchinson. He also made a living on the after dinner speaking circuit. He was banned from , along with many of his 1970's colleagues, by chairman Ken Bates for perceived criticism of the club in the 1990s. Abramovich welcomed him back in 2003 and he took up the post as a hospitality host on match days.

Ossie died on 1st March 2006 following a heart attack at a family funeral.