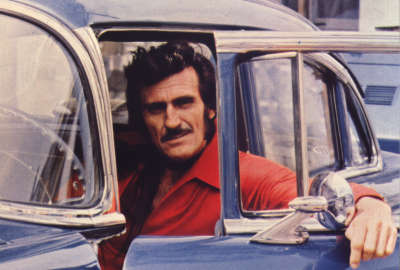 Belatedly again we here at the Tales From The Woods' editorial board wish to say farewell to rockabilly singer/guitarist Sonny Fisher who died on 8th October 2005, aged 73.He was born Therman Fisher on a farm in Chandler, Texas on 13th November 1931, acquiring the nickname "Sonny" sometime during his childhood years. His father played the guitar and sang cowboy songs, mostly just for the amusement of his family and himself but, once the tender ears of the young Sonny began to pick up on the country music he heard on the radio, he vowed to one day become a musician. Not too many months had passed before Sonny had purchased a guitar and no doubt daddy would soon be teaching him the rudiments.

Like so many southern families during these hard Depression years of the thirties, they uprooted and headed out to California and later Washington State. By the time Sonny returned to Houston he would have been grown to a young man. Not wasting much time he put a country band together which found work in the nightclubs around Houston Sonny, though, was very much paying attention to the rhythm and blues music that youths, both black and white, were beginning to celebrate. Adding the exceptionally good guitarist Joey Long to the line-up enabled the band to experiment with a potent mix of country and blues. Come 1954 Sonny would witness Elvis Presley's debut performance in Houston with the obvious mind-set results. Fisher would find himself spotted by club owner and record label boss, Jack Starnes who released Sonny's first single, put out on Jack's Starday label in early January 1955. "Rockin1 Daddy" sold well throughout the South. His follow up, "Hey Mama", did likewise. Three more exultant rockabilly singles followed but national success continued to elude him. When Starday presented Fisher with a royalty cheque for $126 at the end of 1955, he was so displeased he refused to re-sign with them. Attempting to set up his own label and publishing company proved impossible and his band fell apart.

In 1958 he began fronting an all-black rhythm and blues band, no doubt a gesture far too radical for the period and was back on the road with a country band in tow before quitting the music industry completely in 1965. When Soho's Ace Records' market stall decided to set up a label, a ten-inch album of Sonny's primal rockabilly was the first to hit the streets. Sonny, by now living in happy obscurity, was to say the least surprised by the interest generated in his old records. During the zenith of the mid seventies rockabilly revolution he was brought over to appear in Europe. Those who saw him say he still looked great - big pompadour, long sideburns, slim - twenty years on he obviously still had it. He put out a new EP on the Ace label and his popularity grew in France where further recordings were made.

After a successful French tour in October 1981, Fisher returned to Texas and turned down subsequent requests to return to Europe, although he did make a trip to Spain in 1993, to play some dates and record an album backed by Los Solitarios and another veteran rockabilly great, Sleepy La Beef. Why he chose to vanish from the music industry a second time, just when he finally had got something going for himself no one knows, simply because he told no one. Fathering seven children, maybe they knew the answer. -KW